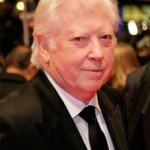 You’ve never heard of the guy, so how does Fred Roos get people like Harrison Ford, George Lucas, and Joan Allen to sing his praises? By making their careers possible. Ford had given up on acting and turned to carpentry when Roos, as casting director, put him in “American Graffiti” and “The Conversation.” Lucas was the director of one failed sci-fi film (“THX-1138″) when he brought on Roos to cast “Graffiti,” a film that launched a dozen careers. Allen was a stage actress pushing 30 when Roos cast her in “Peggy Sue Got Married” and “Tucker.” There’s more: Roos put Jack Nicholson in “Five Easy Pieces” and Brando in “Apocalypse Now,” and he assembled “The Outsiders” — a bunch of kids with names like Tom Cruise, Matt Dillon, Patrick Swayze, Emilio Estevez, Ralph Macchio, and Rob Lowe. Yikes! was “one of the most behind-the-scenes guys there is,” in the words of one participant, onstage and shy in the Colorado spotlight yesterday morning, receiving a Telluride Film Festival tribute for his work in film. He was flanked by Lucas, Allen, and surprise guest Ford, all of whom waxed fulsome after the audience watched a clip show containing rare early screen tests of such actors as Cynthia Nixon, Robert DeNiro, and Nicolas Cage (nice hair, Nic!). “The only reason I’m here is Fred’s persistence and insistence,” avowed Ford, while Lucas recalled that in casting “Graffiti,” “he’d say, `This is the one,’ and I’d say, `No, let’s test others,’ and he was right, every time.” Anecdotes flew through the air — Roos was remembered for mowing actor Timothy Carey’s lawn to get him to consider playing “Godfather” hitman Luca Brasi — and the honoree displayed the temperament of a true Hollywood survivor. Asked how he felt about working on a flop, Roos lifted a gentle eyebrow and responded, “Have I been part of any flops?” Actually, no.

Now that Sofia Coppola is a star director, thanks to the critical acclaim surrounding her film “Lost in Translation,” it’s easy to find a lot of “old friends” crowing about how long they’ve known her, going back to her first film, “The Virgin Suicides,” or her Milk Fed fashion line. But Fred Roos can top everyone. Though he’s far too modest to ever boast, when Roos was casting “The Godfather,” he’d let Francis Ford Coppola and his wife, Eleanor, have a quiet night out by baby-sitting their baby daughter.
Although Roos has been in the movie business since the mid-1960s, the 69-year-old producer is the quintessential insider, barely known to anyone outside the industry. But first as a casting director, then a producer, he’s had a hand in nurturing some of the most notable talent of the last 30 years, from Jack Nicholson and Harrison Ford to Diane Lane and Sofia Coppola.
In addition to Sofia’s film, which earned a Golden Globe as best picture, musical or comedy, on Sunday night, he’s also a producer of “The Young Black Stallion,” now playing in Imax theaters around the country. Having worked with everyone from John Huston to Wim Wenders to Warren Beatty, Roos is one of those unsung figures who seem to have an unerring eye for discovering phenoms. He’s the movie business equivalent of the A&R talent scout who first heard the White Stripes in a noisy downtown club or the baseball scout who first spotted Sammy Sosa sprinting across a dirt outfield in the Dominican Republic.
It was Roos who assembled the astounding young ensembles of both “American Graffiti” and “The Outsiders,” films that gave audiences their first serious look at such future stars as Ford, Lane, Tom Cruise, Richard Dreyfuss, Rob Lowe, Matt Dillon, Patrick Swayze, Emilio Estevez and Suzanne Somers.

When Roos produced a pair of low-budget action films in the Philippines in 1964, he hired the unknown Nicholson to work on the scripts and act in both films. He convinced George Lucas to cast Carrie Fisher over Amy Irving in “Star Wars.” And he nearly altered film history by trying to talk Michelangelo Antonioni out of casting Mark Frechette as the lead in “Zabriskie Point,” lobbying unsuccessfully for Ford, then best known in Hollywood for his carpentry work.

“There’s no doubt in my mind that Fred is one of the great casting talents in the last 40 years of American movies,” says Francis Coppola, who first worked with Roos on “The Godfather.” “He suggested and brought me people I would never have met, such as the great John Cazale.”

Roos’ illustrious career serves as a refreshing reminder that you don’t need a huge ego to make it in Hollywood. In fact, his self-effacing personality has made him especially adept at working with a host of high-maintenance actors and directors.

Over the years, Roos has emerged as one of the Coppola clan’s key confidants. He’s been a producer of both of Sofia Coppola’s films, as well as 10 Francis Coppola-directed films and innumerable Coppola-inspired projects, including Wenders’ “Hammett” and Carroll Ballard’s “The Black Stallion.” In a suite of offices he rents from his friend Beatty, Roos has photos and memorabilia from his various projects with Coppola, who is the godfather to Roos’ son, now, like his father, a gifted high school baseball player.

If anyone has a unique vantage point to assess the generational differences between Francis and Sofia, it’s Roos, who has watched them both in innumerable casting sessions. “Francis will often get something from an actor that will inspire him to tell these wonderful, funny stories,” he explains over lunch, his napkin carefully tucked in his shirt. “Francis knows the words to every Broadway show for a period of a couple of decades and he’ll often sing the lyrics to the entire song. Sofia would never do that. She’s very gentle, always eager to make the actors comfortable. She doesn’t take over the room. So if Francis is big, I guess she’s subtle.”

Roos spent a lot of time with Sofia on her father’s film sets before she went off to work in fashion and photography. When she launched her career as a director, she turned to Roos for advice. “Fred is smart, he has good taste and he’s actually very cool,” says Coppola, who also took home a Golden Globe for her “Lost in Translation” screenplay. “Even though he’s older, he isn’t one of those guys who says, ‘This is how we do it in Hollywood, kid.’ I remember going to lunch with him as a teenager, talking about my ideas, and he never dismissed me, or any of my group of friends, just because we were young. He always took us seriously.”

Growing up in Los Angeles, Roos was always around show business. He joined the Army in the 1950s and went to Korea in an Armed Forces Radio unit where he became friends with future TV producer Garry Marshall. After he got out of the Army, Roos went to UCLA film school, then landed a job as an agent at MCA. He tried his hand at producing, but when work slowed, Roos turned to casting, working on everything from hit TV shows like “The Andy Griffith Show” and “The Guns of Will Sonnett” (where he got Nicholson a part) to hip films like “Petulia,” “Five Easy Pieces” and “Zabriskie Point.” Roos also optioned the book “Drive, He Said,” which became Nicholson’s first movie as a director. After working with Roos on “The Godfather,” Coppola recommended him to his protege, George Lucas, to cast “American Graffiti.”

According to Roos, even in the early 1970s, Coppola was a technophile, using a primitive reel-to-reel video machine to tape casting sessions. No one at Paramount wanted Marlon Brando, whose career was then in eclipse, to play Don Corleone in “The Godfather.” So Coppola and Roos went to London to get him on tape, in character. “Francis brought along a video cameraman without telling Marlon, and some Italian cigars and sausages, and Marlon started playing around and he just became the character,” recalls Roos. “When Francis showed the tape to [Gulf & Western chief] Charles Bluhdorn, it won the day.”

For “Godfather 2,” both Coppola and Roos wanted Robert De Niro to play the young Don. But the young actor wasn’t especially talkative, “so instead of a formal audition, we invited him out to dinner,” Roos recalls. “Bobby thought it was just a social occasion, but we were observing him very carefully, thinking — could he be the young Brando?”

Roos has hundreds of casting tales, whether it’s about the brash young Dreyfuss (“he always said, ‘Fred doesn’t like me,’ and I didn’t — he was obnoxious, but he was also really good”) or the inscrutable Antonioni, who never spoke a word to the actors. “It was really disconcerting for them, especially because he also had this tic” — Roos jerks his head back and forth — “and the actors always thought that they were the ones who caused it.”

It’s especially intriguing to hear him talk about what you might call the Zen of casting. Roos invariably has long conversations with actors, which he believes offers the best insight into what shapes their emotions and personality. When he first met Ford, it took forever to get him to open up, Roos recalls, because “he was angry about Hollywood and the whole studio system.” But it was that same anger that made Ford such a compelling leading man.

“I love the process,” Roos says. “It’s how you replenish your knowledge of actors, by seeing a whole new set of people, people you might want to use for some other project down the line.”

Finding talent involves a lot of legwork. Roos wanted Lane for “The Outsiders” because he’d met with her after seeing her, at age 7, in a play opposite Raul Julia. On the other hand, he discovered Matt Dillon and Ralph Macchio after buying a batch of teen magazines. He lobbied Lucas to cast James Earl Jones as Darth Vader because he remembered his “otherworldly” voice from seeing him on stage. Roos suggested Anna Faris as the ditzy starlet in “Lost in Translation” after seeing her do a comic turn in “Scary Movie.” He knew Nicholson was a budding star just from watching him at parties. “He was sarcastic and charming, but no matter what situation it was, Jack would take over the room without even trying.”

Perhaps the most amazing thing about Roos is that he’s managed to remain close with such a turbulent crowd of characters, from Coppola and Nicholson to Beatty and Robert Towne.

“It’s not just that Fred has such talent,” explains producer Harry Gittes, an old pal. “But he really admires talent. And I’ve never — ever — heard him raise his voice. How many people can you say that about in Hollywood?”